You are here: Home › News › Gani The Porter

This picture puts a perspective on Nigeria that many books may fail to equal.  It describes the current state, while also revealing a previous reality that has been superimposed upon by a new anti-reality.  Let’s start with the white-ish house; rain washed and suffering from an invasion of moss.  In a previous life, it would have been a real white, and the bars in the wall next to the gate would have been the interface to an office in which a security guard could be engaged.  The gate itself, now ravaged by roving bill posters, would have been Spartan clean.  Have you noticed the air conditioner?  Its there!  But only just; most likely more of a decoration than a utility. 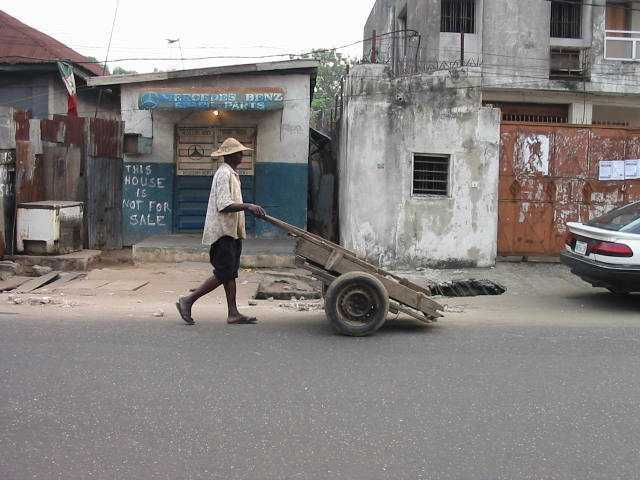 The road edges are falling to bits, revealing the ghoulish soup that lurks in the stagnating drainage system.  A shack nearby bristles with a sign saying, “This house is not for sale”, it is certainly not a house, and don’t be deceived by the three pronged star on the window, there is no affiliation with Mercedes Benz here.  However, with so many fraudsters (419 is the local name) roaming the land, best to make it clear to the credulous, before they get sold a house for which there are no deeds.
Now allow your gaze to rest upon what masquerades as a freezer, somewhere to the left of the picture, between the shack and the house proper.  The wager is still on for who can conjecture what in GOD’s world that thing is doing out there in the open.
Perhaps it is a portable nuclear reactor.

In all of these confusions and contradictions stands my man; Gani, that’s not his real name of course, but I had to give him one apt for his role in this story; I’m sure he’ll appreciate.  He walks with a resolute gait; one can almost sense his peace and contentment.  It has been a hard day, but he is a man harder than the worst day.  “All’s well that ends well” must be his mantra.  As he walks on by, I can almost sense him thinking, “the house once was; isn’t; but will be once again.
Perhaps, maybe, if GOD wills it, I may be the one … “.  Sailing home with yet another day’s earnings, it is clear that he must feel some contentment, satisfaction, and hope; otherwise, why stay with such a hard-bearing means of living?  This man is the quintessential Nigerian; hard as nails, long suffering like driving rain, and optimistic as dawn’s first rays of light.  Though the politicians and the soldiers steal the very road from under them, they can, and will rebuild and re-emerge in a new Nigeria.
While the metamorphosis tarries, do not write the country off just yet.  When that new Nigeria rises, like the Phoenix from its ashes, don’t be surprised; remember, I first told you.     “Otolorin”   10th February, 2002