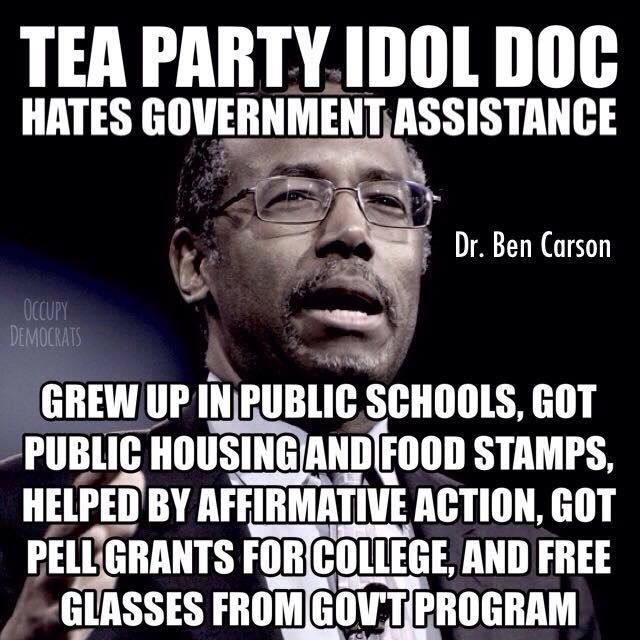 If I’d thought the Ben Carson that popped up on the political stage was nothing but pitiful caricature of expectations, his recent decision to cast his lot with Donald Trump reduces him to a tragic anomaly. Ben Carson is lost in a fugue, wandering farther and farther away from saneness.When recently , some commentators particularly on the European side started doubting his academic credentials, ‎I personally had little difficulty agreeing. Nothing Carson had said or not said since his presidential bid is testimony to intelligence or high learning ‎…..rather eloquent pointers as much to a perplexing ignorance as  mental sluggishness, served in a mushy base of nauseant self centredness. Ben Carson either knows no reality or…. barking mad, ….he has reduced reality to reverse, increasingly locked inside a warped mental state, the product of overinflated ambition and  laser grade schizophrenism chisseling ferociously at his mind. ‎

When he drove a wedge between himself and obama at a white house prayer breakfast he had been invited to, using bufoonedly unproven claims to beat down on obama care, I thought he was not only a very dishonest man, he was also very dangerous : dangerous for a man, wicked for a black. A president Obama … out of a sense of kinship , regard for fellow ‎citizen and assumption of the unfetteredness of a trained mind, extended a brotherly magnanimity to Ben Carson: Carson came, mind furtively fettered to inordinate ambitionspat from deep inside his pathologic guts, poison into the face of his host, dishonest enough to characterise obamacare the worst thing since slavery right to the ear of his host: hoping to be rewarded with a Republican platform to launch lurid ambition‎.

If intellectualism ( and scientific refinement )is less about certificates more ‎about clarity of mind and quality of delivery  Ben Carson comes to the table empty.On the issue of homosexuality, he confused socialization with geneticisation, glibly mistaking what is acquired with what is inborn and conflatingpropaganda with scientific rigor And when his stupidity was outed, he lied, denying he ever said what the entire world heard him say ;In the end, both his stupidity and his dishonesty subsequently came to haunt him…… what kind of intellectualism reduces a man’s breadth to no farther than the tip of his nose.If scholarliness is about incisively prolific thinking, enriched by years of studied and accumulated facts, Ben Carsons shows up little more than arid, obfuscating views and opinions to a set of fermenting ludicrities  totally at odds with cerebrality.

A man who unashamedly would explain the Egyptian pyramids as grain stores for Egyptian Pharaohs around the time of Joseph ; whence such scholarship?If honesty is about dogged affection for and consistent subscription to truths,Carson is stranger to the art. How can he be otherwise?Here is a man who publicly lambasted planned parenthood for trafficking in body parts, condemning same as reprehensible, yet review of his research records revealed he shopped in those very “reprehensible ” places for those very body parts for his own work.If Christianity’s essence is about “being thy brother’s keeper ” ……’us for the other ‘‎, Carson’s ‘us versus them’ is a damnable antithesis, a devil’s advocacy .Yet like many Ben Carsons, many his type,he would constantly drip with biblical and prayer lines at every twist and turn.

The Ben Carsons are the worst enemies of the Christian faith,  irresolvable conundrums in the path of the doctrine.If historical awareness,  knowledge of selfand insight into symbolisms are pointers to the cultured mind, Carson remains in the woods, unevolved from blighted beginnings….no Muslim should be allowed in the white house,…… some Syrian refugees are like rabid dogsOnly a short long period ago, it could have been ….no black man should be allowed in the white houseOr…. no black man at John Hopkins. Governor Wallace was an influence only a short while past;”….segregation now, segregation tomorrow, segregation forever…”. was his clarion call to stop the Martin Luther kings.

Such is the silliness and vacuity of this Ben Carson, he couldn’t see the parallelism or indignant equivalences between words ( perhaps convictions) : his and Wallace’s.Nor would he be reminded of the tremendous sacrifices endured by his slave predecessors  canalising a path for his generation. The day obama was inaugurated, he met the congressman Louise, fellow fighters with MLK in the civil rights tussle, obama slipped a note into the latter’s hand as they walked past each other” because of you “Obama had scripted on that note, too ready to link his victory to their sweat.Ben claims he has repaired brains but seems his is left as cratered as can be.

To go cast your lot with a man like Trump, defending your decision with the argument  there are ” two Donald Trumps ‎” and on the basis of one Trump  you choose to ignore the other Trump , content to place faith in one, recklessly risking acceptance of the other, you are  by that very argument diagnosing no less a content of schizophrenia in the bipolar Donald as in you ….the admirer. And this, the reason I think Ben Carson  is not just a dangerous man, he is as much  a tragic anomaly. So much said.